I work with students from around the globe, even though we work from little Dubai, but we get the students virtually as they find us from the various social media or though the famous Google, or just by writing "study abroad", the chart below shows where our students come from: 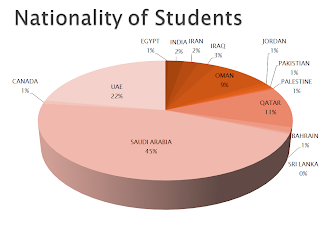 Of course we also send them around the globe, as we try to tailor make their education so it fits their budget and their choice.  Sometime we even try to direct them to a country that will eventually provide them with a nationality if they behave themselves and become a good citizen in that country.  Of course we are not really immigration consultants, as immigration is negative and lowers the moral, but education is positive and someone knows that one day he or she are coming back and benefit their own countries by applying what they studied, if so happen that they loved the country that they studied in, and want to continue to live in it, then we facilitate that too. The chart below shows which countries we have sent the students to: 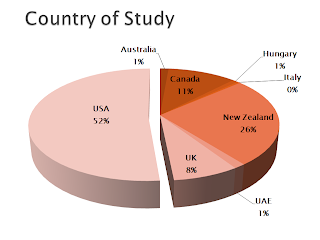 However since last year, with the advent of Arab Spring, we are finding it very difficult to place students abroad, or even to bring them to Dubai,  especially if the students come from those countries that are uprising.  Not saying here that I have an opinion about that, all I am saying is that some people's actions had ruined the chances of others that are aspiring to be doctors, dentists, engineers, social workers, psychologist and so on.  Not only that, some students who have great grades, and are actually in the top ranks have not received their scholarships, because a member of their family had participated in the up-rise so they were tagged as being with the opponents.

My question here is, should countries alter their visa rules to prevent people from traveling for the simple, teeny weeny reason of being vocal? or for trying to kick their presidents out of the 40 years ruling?  So are we saying that countries like USA doesnt want people that try to ask for simple rights? and if so, then does this mean that the people in USA do not have these same simple rights? does this sound correct?

All of this may sound gibberish to you, but to me its a problem that I need to find a solution for, as to me Education comes first and no one should prevent a person from studying especially if the student is a genuine student.

Wake up universities and colleges, your governments are having a pact against you, and you must rally to prevent these stringent visa rules, or you will end up having seats without bums (we call a student a bum on seat by the way) and classes that are half empty.